Grafting in Strawberry to Obtain Heightened Resistance to Pathogens

Introduction:  Grafting is increasingly common in vegetable crops such as cucumbers, tomatoes and watermelons as this technique has continued the possibility of production of these commodities in disease infested soils which can no longer be fumigated or chemically treated.  Similarly, as California berry agriculture faces the post methyl bromide cultural milieu, it was thought that a similar strategy of grafting soil pathogen resistant (or at least tolerant) rootstock to a horticulturally desirable, yet disease susceptible scion, be tested in strawberry.

Trial was run twice in 2015 together with Plant Sciences, Inc. in Watsonville.  Initially, rootstocks were of three varieties here designated as A, B and C, and were self-grafted to scion of the same variety to eliminate the possibility of intervarietal rejection.  Rootstock types were three, those being runners growing in soil, a runner aerially hanging on a stolon and a bare root transplant.

Since successful grafting in vegetables is done by carefully matching the diameter of the rootstock to the scion (this can be obtained for pretty close matches by cutting at angles to enlarge the “footprint” of the scion or rootstock).  As shown in the photo below, conditions were maintained as clean as possible so as to minimize the possibility of contamination.

Grafts were of several different configurations, one a flat cut straight across the rootstock and scion, the other at an angle of both to maximize fit and surface area, the third being a wedge (shown below).  Once the graft was made, the scion and rootstock were fitted together, and held in place with Parafilm to support and protect the graft as it formed callus tissue.  After grafting, the plants were placed were placed in loose vermiculite and held for several days in a “healing chamber” which was a darkened chamber held at 25oC at 100 % relative humidity with no free moisture.  This was followed by a period of adjustment inside of a screenhouse for approximately 3 weeks after which Parafilm was removed and state of the graft evaluated.  Graft union was ABOVE the surface of the vermiculite at all times, to prevent the formation of adventitious roots by the susceptible scion.

Results and Discussion: None of the grafts tested in this trial were successful. No callus tissue formed, with the scion dying or rotting in several cases and many times the plant growing out from the rootstock only.

Acknowledgements:  Many thanks to Plant Sciences, Inc. who donated a significant time and effort of a really skilled team of people to make this work happen. Additionally, real gratitude is owed to Dr. Carol Miles from WSU Horticulture without whom we would not have had the guidance essential to taking on this effort. 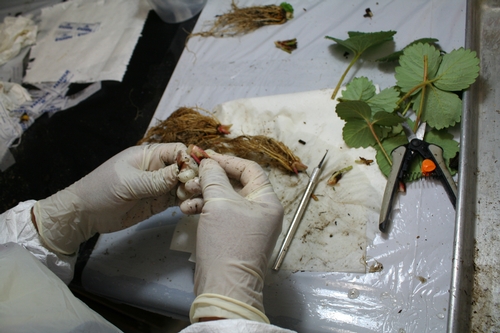 Grafting rootstock and scion together. 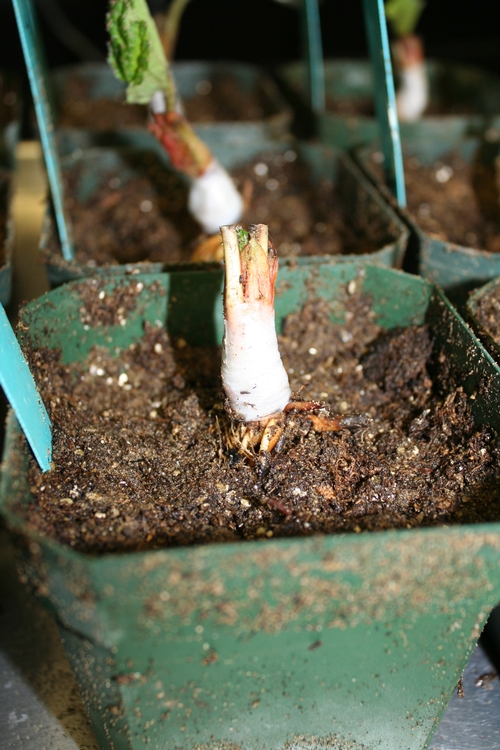 Grafted scion and rootstock, note that graft line is intentionally left above the surface of the soil. 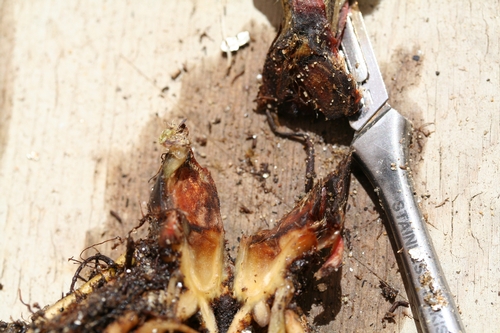 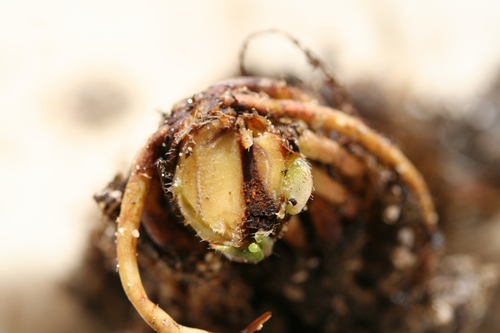 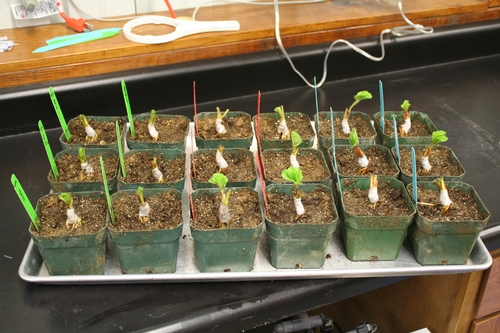 View of one tray set up for first test. 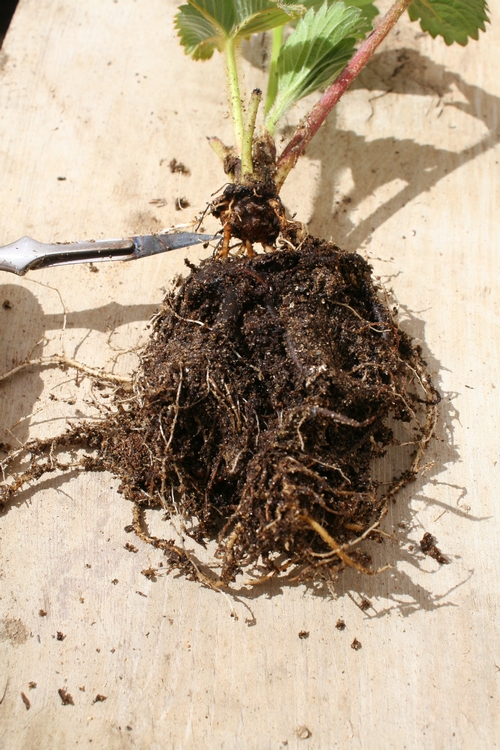 Evaluation, scion pulled free of rootstock without any bonding; note growth of roots from scion. 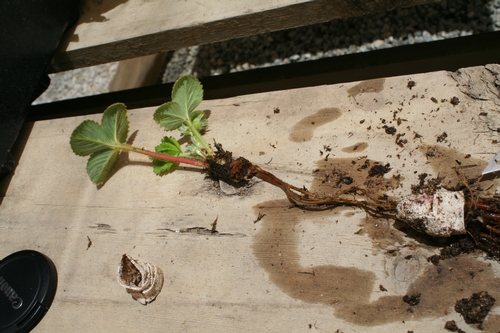 Note signficant root extension from scion allowing it to grow without bonding with rootstock.